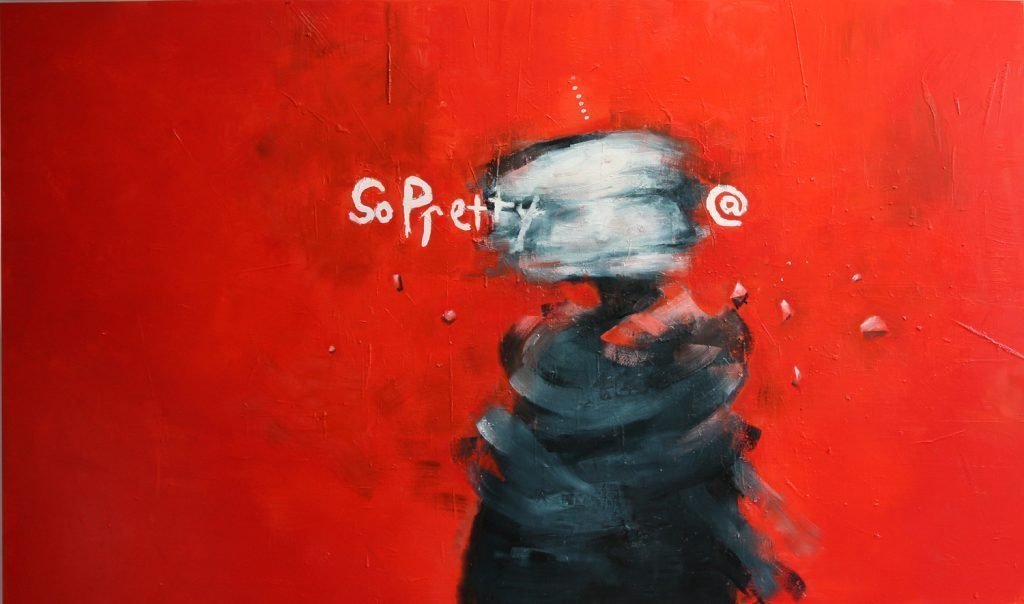 I’d like to thank this month’s featured artist, Brad Robson, for his amazing work in abstract and permission for inclusion in Genesis Journals, which is the monthly journal portion of Gen Society. To learn more about Brad check out his biography below and visit his links.

UPDATE ** I’ve started producing the first song on my upcoming 2019 release, Spiritual Revolution. It’s been a slow transition getting back into production mode, but the ball has once again begun its momentum. I’ll be showcasing individual tunes from the album via Gen Society and Loryn websites. Stay tuned for further updates!

I’m deep in the woods with this magnetic sound of rustling. Thoughts clanking like rusty tin doors opening and closing. A thorough imagination was originating in the midst of what appeared an awakening… or potentially a drastic shove in some calculated direction.

I’ve worked for the government in multiple facets over the years. In my early days I was an operative for a virtually unknown agency responsible for equally unknown operatives, supposedly to engage the floundered pendulums between national and international tides. That’s what they used to say at least—balance the ship! I was there to preserve and protect the regurgitated moral fiber of human coherency (by crossing names off a whiteboard). In my opinion, I was instantiated to supplant characterized integrity with advantageous diplomatic interest. Mostly, my missions, in one way or another, were benefitting financial interests, regardless of whether or not personnel files executed moral responsibility. Everything’s transparent with anonymity, and the key to the largest kingdom is always held in blueprints that are best hidden. Unlawful power has always been the godfather to civilization. And we, the affronting gatekeepers, were there to ensure that power remained steadfast and unencumbered. They viewed me, in particular, as their designated auspice of espionage to fortify their objectives. I was their foremost assassin—an extremely calculated one, too. Though after a few years in the field, things became more complex. The gray patches thickened and I was treading the lines more than ever between criminal and… whatever it was I was before. I began questioning their affirmations more. I couldn’t reconcile which role I was fulfilling, so I withdrew… only realizing later, I was fulfilling only one role… theirs.

The trickling thoughts of my former days as an assassin somehow reminded me of the voice I’d been chasing after. The sound of the ape I’d been trailing in the wilderness. I was hunting once again. Strangely, I felt too I was being hunted. The mid-sentence static breaking thoughts with repeated phrasings—

“We are holograms to a new generation. We shall lead you forth.”

I couldn’t tell you where my old life ended and the new one began. I couldn’t tell you I wasn’t imagining all of this and that that voice, that tantrum of the ape, wasn’t just a figment of myself I was chasing. I couldn’t tell you how I ended up here in the first place. The only thing I remember is emerging from that stream, naked, before God, spit up once again from the earth to scramble and figure out where I was and who I am, with only the silent admission of nature sworn in as my testimony.

a tarantula scurries
under a rock
overlapping its legs in
tandem with the hum of the earth’s
magnetic thrust. the human
torch is a long and lengthy
battle, one that will not
go forgotten. a decaying
horse is seen in the distance—
his spirit risen above, paying
homage to its digressive rebirth
and passage out from the veil

a conductor, in secrecy
of this zen diagram, waves
his wand and the audience
stands and applauds,
then returns to recumbencies
like bug antennas
awaiting further command.
each life and the same,
clapping and thwacking,
desperately overdoing
these stagehands as all
become assimilated to
a dramatization of
indigenous falsehoods and how,
in a situation as this,
in a time as prevalent as now,
everything windshields curbside
and spills the vents
with artificiality—the dream
of civilization

we fail (to fit the pieces to the
process)—yes, this being
the correct linguistic binary
to our reprimanding
milieu. the determining
neologistics of our
dithyrambic verse

i watch the ships
flutter to the dock
as the conductor writhes
at them like a magician,
bouncing them into their
puzzled boxes.
there is no surplus of tears
left to nutrient the roses
that swing like hammers
between prison cells.
everything is frozen,
moving… slowly,
treacherously,
like
a dreadnought
cactus in an octopus
storm

Brad Robson (b. 1976) is an abstract painter and muralist based out of Sydney, Australia. He divides his time working out of his studio in Marrickville and participating in residencies and exhibitions in Europe and the United States.

Robson has exhibited his work at Woodward Gallery in NYC (with permanent inclusion), where his work is often hung beside big names in NYC street art.

Robson is known for his vivid and uplifting color palette, his abstract portraiture and the intensity of movement within each piece. As a self-taught artist, he is keen on expressionism, using his work as a portal to deep-rooted perspectives. His most recent projects include a 14 metre-high portrait in a rural district of Barcelona, illustrations in the upcoming Australian feature film, The School, and a massive commissioned mural on the exterior wall of Vintage Los Feliz Theatre in Los Angeles.

What is Gen Society?

In addition to being an art space blog for writing, travel, music and visual art collaborations, Gen Society is an online venue for a one-on-one creative relationship designed to help artists or prospective artists expand their creativity. It is a platform for teaching, mentoring, coaching, and music production. Gen Society is an experience for those in pursuit of guidance to becoming an artist and/or those looking to grow as an artist and move beyond their own personal limitations.

I would love for you to join me in this experience. Please click below to learn more and join Gen Society: